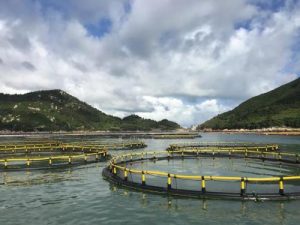 Non-ionic ammonia (NH3) is the number one killer of aquatic animals invisible; aquaculture production should control the concentration of NH3 in 0.015ppm less, higher than 0.02ppm cause death.

Crab, shrimp nursery MH3 should be controlled at 0.01ppm less than 0.01ppm will cause death.

Nitrite is the source of aquatic animal pathogenic.

It will destroy the red blood cells

So that the gradual loss of oxygen capacity of the blood, and to fish in the liver, spleen and kidney function is poor, resulting in fish physical deterioration, poor spirit, therefore susceptible to various diseases.

This phenomenon as long as the content of nitrite concentration is higher than O.1 - 1.0ppm, will produce, but Rengyi different species vary.

In addition, water hardness will directly affect the toxicity of nitrite in water quality in higher hardness;  and reduce nitrite toxicity.

Aquaculture water nitrite chlorine should be controlled below 0.1ppm, 0.5ppm cause when death or illness.

Higher than 0.8ppm will cause a large number of deaths.

Crab, shrimp nursery water nitrate-nitrogen should be controlled below 0.1ppm, 0.3ppm mild when killed, and more than 0.5ppm will cause a lot of deaths.

Under normal circumstances, the value should be less than nitrite 0.20ppm, while shrimp crab nursery.

The nitrate content of water in Central Asia must not be higher than 0.20ppm.

If the measured value represents the danger of 0.5-2.0ppm, if higher than 2ppm, this case is very dangerous.

The conditional case, the number of water changes

The concentration of hydrogen sulfide control in aquaculture water 0.1mg / L or less, the bottom should have more stinking mud and bait.

Dissolved oxygen ensures that the shrimp can be normal and healthy growth.

And also improve water quality and necessary sediment substances in shrimp farming should ensure that the whole process with sufficient oxygen, it is best kept at 5mg / L or more.

Bottom water shrimp farming in South America, in general, should not be less than 3.5mg / L or more.

When the dissolved oxygen dropped 1mg / L, there vannamei Floating risk of death;

Pond sediment and plankton in water also consume a lot of oxygen, the data show, the night of shrimp consumed only 5% of dissolved oxygen in the pond, the pond sediment eliminate about 50% to 70%, plankton consumed about 20 % ~ 45%.

It is a major factor in causing changes in the chemical composition of water, such as lowering the pH value causes toxic hydrogen sulfide increases.

Chlorine is a serious effect for fish, algae phase equilibrium bacteria. So do not abuse disinfectant.

So do not abuse disinfectant.

Maintain at 0.02ppm or less chlorine in aquaculture water quality.

1, under normal circumstances, the chlorine content should be less than 0.02ppm;

2, if the content is too high, should be more open aerator to improve dissolved oxygen in the water to reduce the toxicity of chlorine.

In simple terms, the total alkalinity of the water is absorbed cations (e.g., hydrogen ions H +) to maintain the pH (pH) of the same capacity, i.e., the reaction is total alkalinity buffering capacity of water bodies.

TBN is high, water quality due to external factors (such as rain), the magnitude of change caused by small, so-called "quality and stability."

Changes in water quality, aquatic animals must spend more energy to regulate osmotic pressure; quality and stability, especially in the farming of shrimp larvae in the breeding process of metamorphosis and growth would be more successful; develop the process, the immune system is more robust animal farming, responsive, normal physiological function and growth.

Conversely, if the total alkalinity is small, water may suddenly change, then farmed animals prone to strong stress response, resulting in disease-prone.

Like phosphate, detergents can cause fish and other aquatic organisms anoxia.